There, the capitalists are admitting it–the system is rigged.

In his latest newsletter, financial advisor, John Mauldin, Co-Founder of Mauldin Economics, acknowledges that the system is rigged in favor of the wealthy and powerful, and against everyone else, including the shrinking middle-class. Mauldin says:

The “financialization” of the American economy has led to increasing income and wealth disparity. As much as it pains me to say it, the “system” really is rigged. Whatever the good intentions of the Federal Reserve in particular and the US government in general have been, it has distorted the economic feedback loops that balance a true market-based economic system. The fact is we already have “socialism” today. It’s not the socialism we feared in 1974. We have socialized the risks of capitalism, to the benefit of a small portion of the country, while a larger portion struggles.

So, Mauldin admits what has been obvious for a long time, that the U.S. economy is characterized by socialism for the rich ruling class, and dog-eat-dog competition for everyone else. He cites this fact as the main reason why political outsider Donald Trump was elected President in 2016 and why “socialist” Bernie Sanders might conceivably be elected President in 2020. I agree.

So, what do Trump and Sanders have in common?

As I see it, both are viewed by the electorate as “populist,” which ostensibly means anti-elite, Trump representing right-wing populism and Sanders left-wing populism. But, except for paying lip service to a plan to shift U.S. foreign policy away from the imperial belligerence of the deep state, Trump’s actions as President belie any anti-elite sentiment. In fact, it’s been quite the opposite.

What people want is something other than the globalist, interventionist, imperialist policies of the past several decades that have wasted enormous amounts of resources, killed hundreds of thousands of people, destroyed communities and nations, and caused political upheaval around the world. People want relief from the economic policies that have favored capital over labor by increasing capital mobility while shifting jobs from the U.S. to low wage countries especially in Asia, and at the same time reduced constraints on banks and corporations, enabling them to more fully exploit people and the environment.

In April of 2016, in the midst of the previous presidential campaign, I elaborated on this point on my website, saying:

Despite the evident philosophical differences between Republicans and Democrats and the outdated characterization of political sentiments as being right or left, conservative or liberal, the phenomenon of massive popular support for the two apparent anti-establishment candidates, Donald Trump and Bernie Sanders, reflects a deeper concern that is shared amongst their supporters.

Can either Trump or Sanders, or anyone else for that matter, remedy any of those concerns from the White House? Given the present political structures and dynamics of power based on the control of money, that seems very unlikely. Reversing the destructive anti-democratic trends will take a massive popular movement, one that makes clear to people what their common interests are, and is able to get them to work in harmony toward common goals.

Riding the wave from edge to edge

In light of all that, it is entirely conceivable that the U.S. electorate might swing quickly from one polar extreme, represented by Trump, to the other, represented by Sanders. In 2008, the American people elected Barack Obama because he promised real change, but his failure to deliver left people frustrated. Then, in 2016, people rejected Hillary because they saw her as offering nothing but a continuation of the same old stale policies of the previous four administrations. If Hillary had been male rather than female, she might have lost the popular vote as well as the electoral vote.

While Mauldin faults the policies of the government and Fed for distorting the “economic feedback loops” that he says are supposed to balance his mythical market-based economic system, the problem goes much deeper than the policy level, it is rooted in the very structures and institutions of capitalism, especially money, banking and finance, and the entities we call corporations.

Mauldin is not the first capitalist to acknowledge that the system is rigged. The New York Times, back in 2006, quoted billionaire Warren Buffet as saying, “There’s class warfare, all right, but it’s my class, the rich class, that’s making war, and we’re winning.”

In the long run the system needs to be “unrigged” but that will take time, organization, and a massive popular movement working to strengthen democracy by decentralizing decision-making and devolving power to the States and to communities. In the short run, if we can’t have a fair system, maybe we can at least make the rigged system a little less exploitative by electing candidates that promise to enact social, educational, and economic measures that assure satisfaction of everyone’s basic human needs, provide future generations with pathways to their betterment, promote environmental sustainability, and advance the common good.

The last time we faced such a severe social, political and economic crisis was

during the Great Depression of the 1930s. It was the New Deal programs of Franklin Delano Roosevelt (FDR) that brought about a sea change in the fortunes of the majority of Americans. But many oligarchs of the time were not happy with Roosevelt’s “socialist leanings,” some even called them “communist.” They went so far as to try to recruit Major General Smedley Butler, one of the most decorated war heroes of his time, to lead a coup that would take power away from Roosevelt and establish a de facto fascist government in Washington. To his credit, Butler refused to play along and blew the whistle on the plot. A Congressional investigation followed but no one was ever prosecuted.

FDR’s programs not only provided a “social safety net” to help farmers, the unemployed, and retirees, but brought about a post-war prosperity that was 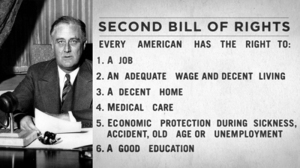 widely enjoyed. My father on his modest income as an insurance salesman’s was able to provide a decent home for his family and send me and my sister to college without going into debt (there was no such thing as a student loan back then). Other New Deal programs reigned in corporate power and put constraints on capital.  One key measure was The Glass-Steagall Act which separated “commercial banking” from “investment banking,” effectively prohibiting bankers from “using depositors’ money to pursue high-risk investments.” Unfortunately, this act was greatly weakened by the deregulation measures of the 1980s and 1990s setting the stage for the 2008 financial crisis.

The New Deal resulted in a much larger and stronger role for government as a “countervailing force” which, it has been argued, saved capitalism by moderating or compensating for its excesses. While the idea of smaller, less intrusive government has wide appeal, so long as the financial and economic systems are rigged against the vast majority, people have little choice but to use government, if they can, to get a fairer shake. Looking back over the past four or five decades it is evident that much of the New Deal has been systematically dismantled and

the lower classes have been forced to bear a greater portion of the burden for government services. Taking income tax rates as an example, we see that from 1950 to 1963 the marginal rate on the highest income bracket was 91%. Since then it has been repeatedly reduced and today, the highest marginal income tax rates are only 37% on incomes above $518,400 (single or head of household), $622,050 (married).

Likewise, the tax on corporations has been drastically cut. During the 1970s to mid-1980s it varied between 49% and 47%, and was then cut to 35%, then, in the Trump tax cut package of 2017, the corporate tax rate was slashed to 21%. Further, loopholes in the tax laws often enable the biggest corporation to pay no taxes at all. In terms of social justice and equity, that makes no sense. The key privilege granted in a corporate charter is “limited liability,” which means that the owners (shareholders) are liable for the acts of the corporation only to the extent of their financial investment in it. But limited liability has an obvious social cost. Cases of corporate malfeasance and damage to people and the environment are legion. It is often the case that an offending corporation will declare bankruptcy and leave its mess for people and their governments to clean up. In principle, any privilege granted by a government to private interests should be priced adequately to offset its social costs and provide a share of its benefits to enhance the common good. The corporate income tax is a way of doing that. It needs to be increased not cut.

Despite the efforts of many politicians to weaken it, Social Security remains one of the most important and popular self-financing programs instituted under the New Deal. For many years I paid into it and I’m now drawing out of it. I rely upon Social Security to provide me with a reasonably dignified retirement. Without it, I and many other Americans would be all but destitute.

I have a sense that the American electorate may by now be fed up with Trump’s failure to deliver what they had hoped for. But if given the choice between Trump and an establishment candidate, like Biden, they will either vote for Trump or watch the election from the sidelines. Either way, Trump wins. With the Democrat party establishment doing everything they can to derail the populist movement by ganging up on Sanders and ignoring Tulsi Gabbard, it is clear that they prefer another four years of Trump to the checks on elite power and the military-industrial complex that Sanders and Gabbard have promised to enact.

In the worst case, the country will tough it out for another four years, but the populist wave will continue to build; a rigged system always generates backlash.  In the best case, with the right people in government, Americans might get some breathing room and respite from the predation of the corporate behemoths. In either case, the ultimate realization of social justice, economic equity, true democracy, peace, and environmental stability will depend on people learning to work together in our communities to find common ground and tackle the larger task of building systems that better serve all the people and promote the common good. Your vote does count, so stand up and be counted.

Thomas H. Greco, Jr. is a leading authority on monetary and financial innovation and new economics.  His latest book is The End of Money and the Future of Civilization. He can be reached via his website, BeyondMoney.net.

A version of this article was also published on Medium