Back in the USA

I’ve been back in Tucson since early October, resting and recuperating from five months of travel and an exhausting summer tour of Europe. I’m corresponding, writing, advising and waiting to see what new opportunities might present themselves.

My tour of Europe included presentations, interviews, and/or workshops in Greece, Italy, and Ireland. As recordings of my presentations become available, I will be posting them on my website https://beyondmoney.net/. So far I’ve posted interviews from Athens and Sardinia, and the slide show from the workshop I conducted in Athens. The audio of my August 28 Dublin presentation, The Liberation of Money and Credit, can be heard at https://soundcloud.com/flanagankev/thomas-greco-dublin-august-28-2015.

Common Dreams has just published my latest article, 50 Ways to Leave the Euro: Greece and the Global Crisis. In this article I provide my prescriptions for how Greece (and other countries) might relieve their impossible debt burden, and I describe ways in which domestic liquidity can be created apart from the euro regime and without inflation. You can read it here. I’ve also posted it on my website as a PDF file.

As an aside, in addition to Greece’s economic and financial problems, the country has been overwhelmed by a flood of refugees and migrants. It is reported that more than a half million have arrived on Greek islands just in the past 10 months. This refugee crisis that is now threatening all of Europe is a direct result of the destabilizing actions by the Western powers attempting over the past several years to reshape the politics of the Middle-east and North Africa. Their agenda goes way beyond oil, but few people are paying any attention. Former Reagan administration official Paul Craig Roberts is one of many sources that provide deeper insights, for example in his article, The Re-enserfment of Western Peoples.

Raising the debt ceiling—again…, and again…, and..!

Every few years the U.S. Congress goes through the charade of debating whether or not to raise the limit on the government debt. In the end they always do. According to Wikipedia, “the US has raised its debt ceiling (in some form or other) at least 90 times in the 20th century.[11] The debt ceiling has been raised 74 times since March 1962,[12] including 18 times under Ronald Reagan, eight times under Bill Clinton, seven times under George W. Bush, and five times under Barack Obama.”

Why continue the pretense that there is any choice about it? Why can’t the government balance its budget and why does the national debt keep increasing? The real answer, which I wrote a quarter century ago, will probably surprise you. To learn what it is, see my recent post at https://beyondmoney.net/2015/10/15/why-cant-governments-balance-their-budgets/.

Recordings made at last June’s Seizing an Alternative conference at Pomona College are being compiled and made available at the Pando Populus website. These include several sessions from Track 6: Political Collapse in which I participated.

Session 1 featured presentations by John B. Cobb, Jr., Ellen Brown, and Thomas Greco. In this recording, John Cobb’s introduction is followed by Ellen Brown’s presentation (starting at minute 6:45) and Thomas Greco’s (starting at minute 22:24 and ending at minute 44:15). A Q&A session runs from minute 44:15 to the end. In my portion I provide a brief overview of private currencies and exchange systems and present some of my early prescriptions for addressing the Greek debt crisis.

I was very sad to learn recently that Peter Etherden has passed away. Peter was one of my very good friends with whom I always enjoyed visiting and discussing our mutual interests. I’m glad that 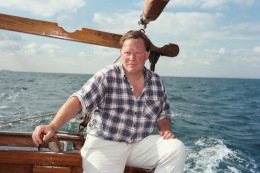 I got to see him a few weeks ago in London just prior to my return to the U.S.

I first met Peter in 1986 in Zurich where we both attended the Fourth World Assembly that was organized by John Papworth. Over the subsequent years we corresponded regularly and we were able to meet several times during my visits to England. One of my fondest memories is of my visit in 2002 when he and his partner Connie lived aboard their boat in Rye harbor. During that visit the three of us sailed across the English Channel to Bologne where we spent a few days at mooring in the harbor. I also recall 2001 when my then partner Donna and I visited Rye and the four of us went off to explore Devon and Cornwall, a very beautiful part of Britain.

Peter was a diligent researcher and prolific writer whose interests were wide ranging. He will be greatly missed. Many of his research compilations and his writings under various pen names can be found at http://www.cesc.net/.

The case of Iceland – Is democracy more important than financial markets?

In his 2012 CBC interview, the President of Iceland very articulately describes the situation as it played out in his country during the global financial crisis that began in 2008. He describes the ways in which the failure of Icelandic banks was handled, the strong reaction from the British and Dutch governments, the reasons behind his government’s actions, and what really is at stake, not only for Iceland but for every country in the world. See it at https://youtu.be/7zlzC_X MQzI.

In case you missed the news, as I did, the Social TRade Organisation (STRO) last year was chosen by the Bill and Melinda Gates Foundation to receive the prestigious E-pay Innovation Award for its Cyclos secure payments platform. Cyclos was chosen to receive the award over 9 other contenders from around the world. The $50,000 award was given at a ceremony at the annual conference of the Electronic Transactions Association in Las Vegas.

Finally, as Thanksgiving day in the U.S. approaches, I’m reminded of how blessed my life has been. It is in the spirit of gratitude that I thank you for your support and wish you all a happy holiday season.

This entry was posted in Developing Alternatives, Emerging paradigm, My activities, Prescriptions and tagged newsletter. Bookmark the permalink.