Iceland takes a more rational approach to the finacial crisis

A Bloomberg report of February 28, 2012 describes the steps that Iceland has been taking to deal with their banking crisis. A basic feature of their policy has been debt relief  for homeowners. Here’s are some excerpts:

“Once it became clear back in October 2008 that the island’s banks were beyond saving, the government stepped in, ring-fenced the domestic accounts, and left international creditors in the lurch. The central bank imposed capital controls to halt the ensuing sell-off of the krona and new state-controlled banks were created from the remnants of the lenders that failed.

Iceland’s special prosecutor has said it may indict as many as 90 people, while more than 200, including the former chief executives at the three biggest banks, face criminal charges.

Larus Welding, the former CEO of Glitnir Bank hf, once Iceland’s second biggest, was indicted in December for granting illegal loans and is now waiting to stand trial. The former CEO of Landsbanki Islands hf, Sigurjon Arnason, has endured stints of solitary confinement as his criminal investigation continues.

That compares with the U.S., where no top bank executives have faced criminal prosecution for their roles in the subprime mortgage meltdown. The Securities and Exchange Commission said last year it had sanctioned 39 senior officers for conduct related to the housing market meltdown.”

One wonders, why the same approach was not taken in the U.S.? I would venture to say that it all boils down to political power–who controls the government? Iceland is a small country, which probably accounts for the ability of the people to influence the government to an extent that seems impossible in a country like the U.S., where, instead of relieving the people, the government chose to relieve (reward) the banks that created the problem in the first place. It did that by shifting the excessive and unserviceable debts from the banks’ balance sheets to that of the government.

That, in turn, required a huge expansion in the national debt, but that will not and 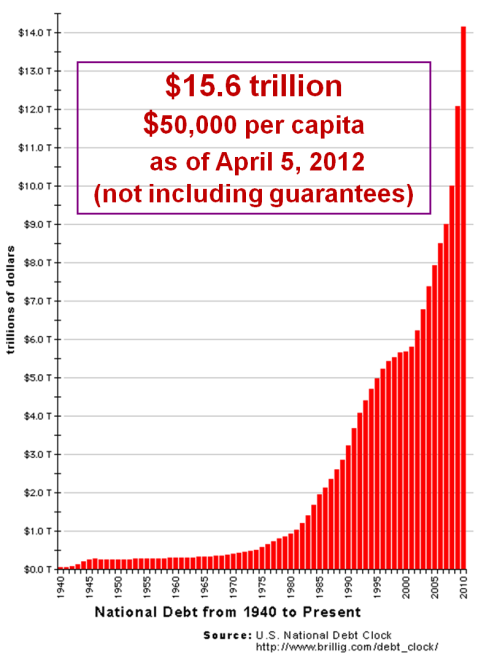 cannot solve the problem. It will only make matters worse because the world is losing its appetite for U.S. government bonds. When the Federal Reserve steps in as “buyer of last resort” we get a further debasement of the dollar and ultimately price inflation, which causes the savings of the middle-class to be wiped out.

The debt-money system has inherent in it a growth imperative. Banks create money on the basis of interest-bearing loans. The interest burden requires the creation of additional debts so that the interest can be paid. That cannot continue forever; debts must ultimately be forgiven.

But even that, by itself, is not sufficient to prevent a recurrence of the bubble-and-bust cycle. Money must be created interest-free. The best way to achieve that is by creating competing means of exchange like mutual credit clearing and private cooperative currencies.–t.h.g.

This entry was posted in Finance and Economics, Geo-politics, The Debt Imperative, The Political Money System and tagged Iceland, mutual credit clearing. Bookmark the permalink.